Some rounds are currently running behind schedule. Please leave your containers out and we will return as soon as we can.

There’s just over a week left for Teignbridge residents to give their views on possible sites for wind and solar generation, small scale development and for gypsy and traveller pitches.

By taking part in the local plan consultation, residents can influence which of the 27 possible sites for wind turbines and the 24 small development sites are included in the updated local plan as well as commenting on the suitability of a site outside Ashburton for gypsy and traveller pitches.

And they can also give their views on a proposed new policy that would establish a planning premiss that applications for solar/PV development would be granted where the benefits of renewable energy creation outweigh any other potential disadvantages.

The 10 week consultation, which closes at noon on Monday 24 January, is a key opportunity for local people to help shape Teignbridge’s development over the next 20 years as the environmentally sustainable power generation options contained in the consultation will contribute significantly to implementing the Council’s commitment to reducing its carbon footprint.

Executive Member for Planning Cllr Gary Taylor said:  “A study we commissioned from Exeter University showed that we are not making the most of our natural wind resource, and that up to 217 Gigawatt of energy could be generated from onshore wind.

“About 30 per cent of this untapped wind generated energy would be sufficient for example to meet the electricity demand of 10,000 new homes and 10,000 electric vehicles.

Cllr Taylor also urged people to look at the list of small one hectare rural sites set out in the consultation documents being considered for development and which can each accommodate 25-50 homes.

“Small residential sites can make a vital contribution in supporting local smaller builders and the rural economy, while also helping meet government housebuilding targets” said Cllr Taylor.  “We very much hope that residents of these more rural parts of the district are looking at these sites and will let us have their views.”

As well as completing the online feedback survey at teignbridge.gov.uk/localplanreview paper copies of the consultation documentation can be viewed at our Forde House offices, local libraries and Town and Parish Council offices.  People can also send their comments by email to localplanreview@teignbridge.gov.uk  or if they don’t have internet access can write to the council. 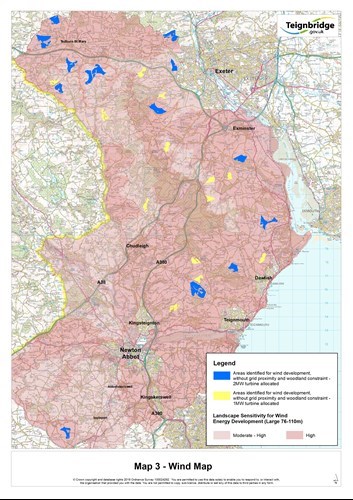