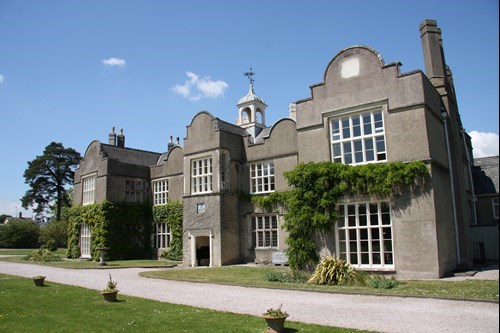 John Gaverock bought the manor of Wolborough from Henry VIII. When Gaverock became lord of the manor he set about building himself a new home at Forde. The older building at the rear of Forde House is believed to be the house erected by John Gaverock when he first acquired the house.

John Gaverock's three daughters inherited Forde House and, towards the close of the sixteenth century, sold it to Richard Reynell of the Middle Temple and his wife Lucy.

The present house bears the date 1610 and is built in the shape of the letter E, commonly thought to be in honour of Queen Elizabeth 1, who had just died.

Richard Reynell was knighted by King James I.

King Charles I stayed overnight at Forde House on his way to Plymouth.

Sir Richard died at the age of 76 and is buried in the magnificent monument in the chancel at Wolborough Church together with Lady Lucy, who died in 1652, aged 74.

Sir Thomas Fairfax and Oliver Cromwell stayed at Forde House on their way to Dartmouth.

The young heiress of Forde, Margaret, only daughter of Jane Reynell and Sir William Waller, married Sir William Courtenay, Lord of nearby Powderham Castle, in 1648. The estate thereby passed to the Courtenays.

William, Prince of Orange, sailed to Brixham to lead his army to London. Two days later he reached Newton Abbot and declared his intention to become King of England. The general public were addressed from St. Leonard's Tower in Wolborough Street, where the bells were afterwards rung in celebration.

William came to Forde House to visit Sir William Courtenay, who was not there. The staff had however been instructed to provide food and accommodation for the Prince. William stayed overnight in what is now known as ‘the Orange Room’.

William Courtenay died. Forde House continued to be owned and used as a residence by the succeeding generations of the Courtenay family until 1762, when the house was let.

Forde House was sold to the Sellick family, when it became the base for an antique business.